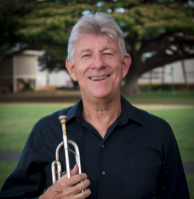 Kenneth’s music studies included undergraduate work at the State University of New York and graduate studies at Indiana University; he holds a Master’s degree from Northwestern University. He has performed as a member of the trumpet section of the Hawaii Symphony Orchestra (HSO) and predecessor Honolulu Symphony for more than 20 years and has been with Chamber Music Hawaii for most of those 20 years. His performing experience includes work with the Buffalo Philharmonic Orchestra under direction of Michael Tilson Thomas and with the Maui Symphony. 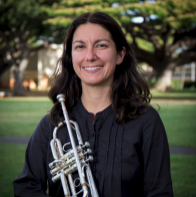 JoAnn is the Associate Principal/2nd Trumpet of the HSO. She is also a member of the trumpet section of the Reading Symphony in Reading, PA. Other performance experiences include the Baltimore Symphony in Maryland, New Jersey Symphony, State of Mexico Symphony in Toluca, Mexico, Taoramina Arte in Sicily, Adele, Josh Groban, and the Spoleto Festival. Prior to coming to Hawaii, JoAnn held a position with the Charleston Symphony in South Carolina. She received her Bachelor of Music from Boston University and a Master’s degree from the Manhattan School of Music. 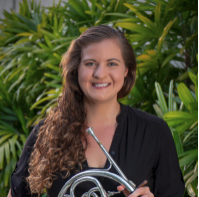 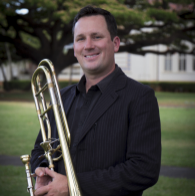 A member of the Honolulu Brass Quintet since 2009, Jason is Principal Trombonist for HSO, a position he has held since 2008. He is Lecturer of Trombone at University of Hawaii at Manoa and low brass instructor at the Punahou School. Jason received his Bachelor of Music from San Francisco Conservatory of Music and Master of Music from Manhattan School of Music. Before coming to Honolulu, Jason held positions with the Colorado Springs Symphony, San Antonio Symphony and the Cleveland Opera. 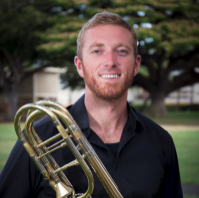 Rudi is Acting Principal Bass Trombone with HSO, Principal Bass Trombone with the Santa Barbara Symphony, lecturer of brass at University of Hawaii at Manoa, and also performs with Hawaii Opera Theatre. He received the Bachelor of Music degree from California State University at Sacramento and Masters of Music from the Julliard School. He has performed widely with symphonies throughout the country, recorded Charles Ives’ Symphony No. 4 with the Seattle Symphony, and is on the soundtracks of numerous videogames.

Hawaii’s own SPRING WIND QUINTET, founded in 1974, has been at work for almost a half-century bringing chamber music to concert halls, schools, libraries, parks, and to the airwaves via radio and television throughout Hawaii. The Spring Wind Quintet started small, performing only a handful of concerts per year, but in the late 1970s the Quintet’s activities increased dramatically, thanks to a grant award from Chamber Music America to establish an ongoing chamber music residency program in Hawaii. These activities, along with the creation of a resident string quartet and brass quintet, led to the birth in 1982 of a new organization, Chamber Music Hawaii, which is now the leading presenter of chamber music in Hawaii. In addition to its resident colleagues, the Galliard String Quartet and the Honolulu Brass, the Spring Wind Quintet has collaborated with the Kronos String Quartet, the Sierra String Quartet, the Annapolis Brass, and the Bergen Wind Quintet, as well as distinguished solo artists such as pianists Jon Nakamatsu, Joyce Yang, and Jon Kimura Parker.
The Spring Wind Quintet has an extensive and varied repertoire, ranging from the standard classics to contemporary, pops, and Hawaiian music. Many new works have been composed or arranged especially for the Spring Wind Quintet. The group has performed concerts throughout Hawaii, in New York, Norway, and Micronesia, and also offers educational programs for all ages, including youth concerts, band clinics, and workshops.
In recognition of its contributions to the quality and quantity of chamber music in Hawaii, the Spring Wind Quintet has been the recipient of grants from many private, corporate, and governmental foundations, including the Hawaii State Foundation on Culture and the Arts, the Honolulu Mayor’s Office for Culture and the Arts, the McInerny Foundation, Cooke Foundation, and Atherton Family Foundation, and also several national foundations, including the National Endowment for the Arts, the Atlantic Richfield Foundation, and the C. Michael Paul Foundation. 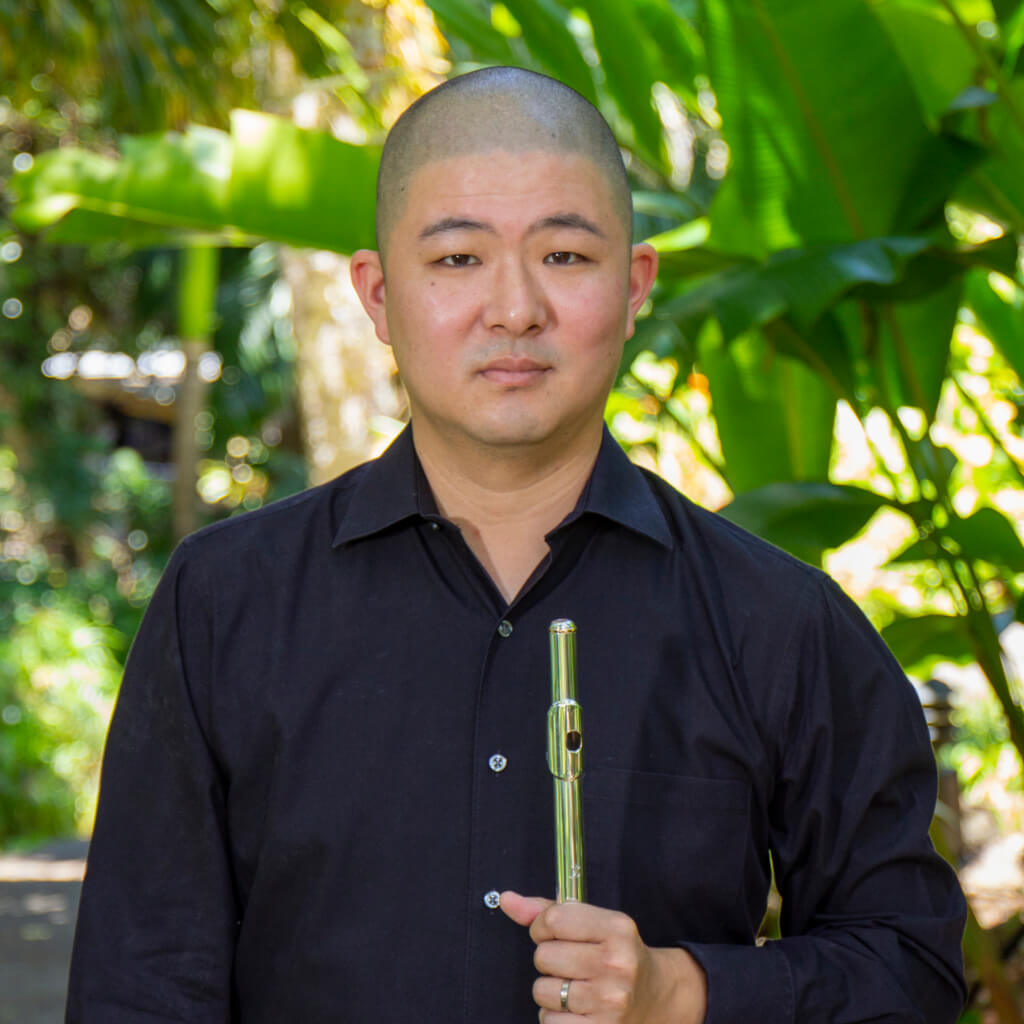 Consistently praised for his “gorgeous flute tone” (NY Times) and his “captivating” (NY Concert Review) and “mesmerizing” (NY Classical Review) performances, Lance has performed as a chamber musician and soloist at venues such as Carnegie Hall, Lincoln Center, the Metropolitan Museum of Art, the Marlboro and Bard Festivals, and live on NPR’s Performance Today. He appears regularly as Principal Flute of the Wintergreen Festival Orchestra and the Mark Morris Dance Group Ensemble and was Piccolo/Third Flute in the Hawaii Symphony Orchestra from 2015-18. He holds degrees from the Manhattan School of Music and the University of Southern California and is also a graduate of the Punahou School. Committed to educating the next generation of young musicians, he serves on the Board of Directors of the Hawaii Flute Society and the Hawaii Music Teachers Association. 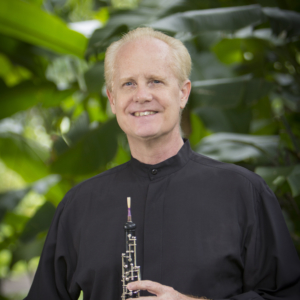 Scott is Principal Oboe of the HSO and was a scholarship student at the Manhattan School of Music and the Cleveland Institute of Music. His teachers include John Mack, Elaine Douvas, Henry Schuman and Marc Lifschey. Scott has also held Principal Oboe positions with the San Antonio Symphony, San Diego Symphony, and the Kansas City Symphony. Oboist in the Spring Wind Quintet since 1996, Scott also serves as the Education Outreach Coordinator for Chamber Music Hawaii’s in-school and community concerts and workshops. 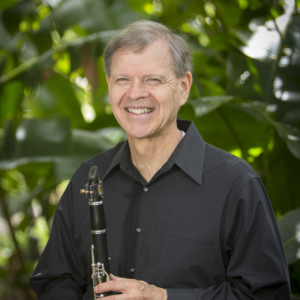 Jim is the Associate Principal and Bass Clarinetist with the HSO, having served many seasons as Acting Principal Clarinetist with Chamber Music Hawaii’s Spring Wind Quintet since 1986, he served two seasons as Acting Assistant Principal and E-Flat Clarinet with the St. Louis Symphony Orchestra. He has performed, toured and recorded with the Chicago Symphony Orchestra and Chicago Symphony Winds. A former member of the Alabama Symphony, he performed with the Santa Fe Opera Orchestra for 10 seasons and has also performed with the Colorado Symphony, Aspen Music Festival, Britt Festival, the Santa Fe Chamber Music Festival and La Jolla Summerfest. Jim also serves as Board President for Chamber Music Hawaii. 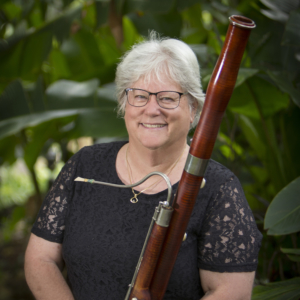 Marsha is the former associate principal bassoonist of the HSO, and she also served as principal bassoonist of the Hawaii Chamber Orchestra, Maui Symphony, and the Honolulu City Ballet Orchestra. Marsha graduated from Oberlin College and studied bassoon with Leonard Sharrow, Kenneth Moore, Artemus Edwards, Steven Maxym, and chamber music with Marcel Moyse. Marsha is a music publisher and a prolific arranger, having expanded the SWQ’s repertoire through her many arrangements and transcriptions for woodwinds, many of which are published and recorded. Marsha co-founded and served as the initial executive director of Chamber Music Hawaii. 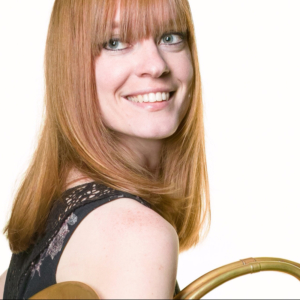 Originally from Wichita, KS, Jamie holds a bachelor’s degree from the University of Kansas and a master’s from the University of Texas at Austin. Before moving to heavenly Hawai‘i in January of this year to play acting 3rd/associate principal horn with the Hawaii Symphony, she was residing in upstate New York playing with the Orchestra NOW and performing all around New York City. A firm believer in the vital importance of music education, Jamie is a member of Trade Winds Ensemble, a group of musicians that united in 2013 in response to the social injustices around the world and their shared belief in the power of music. They have held residencies in Kenya, Tanzania, Chicago, Haiti, and Detroit. 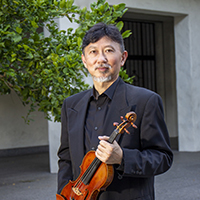 Principal 2nd Violin with the Hawaii Symphony Orchestra (HSO), Hung Wu is a native of Taiwan who joined the orchestra in 1993. He earned his Artist Diploma in violin performance from the Hartt School of Music in Connecticut and received his Master of Music degree with honors from the New England Conservatory of Music. 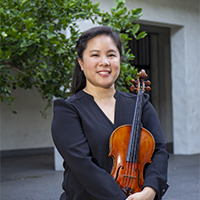 Dr. Liu performs with the HSO and with Ebb and Flow Arts chamber music series, based on Maui. She holds degrees in violin performance from Stony Brook University (D.M.A.), New England Conservatory (M.M. and G.D. with Concentration in Music-in-Education), and University of Maryland – College Park (B.M.). She is currently on the violin and chamber music faculty at Punahou School, Iolani School, Bringham Young University-Hawaii, and serves as a string clinician at the Hawaii Youth Symphony’s Pacific Music Institute. 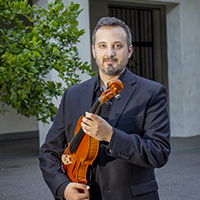 Colin Belisle performs with the HSO and has performed regularly with the Rhode Island Philharmonic, New World Symphony in Miami, and Portland Symphony. He received a Master of Music degree and Graduate Diploma from the New England Conservatory, and a Bachelor of Music degree from Lawrence University Conservatory of Music. 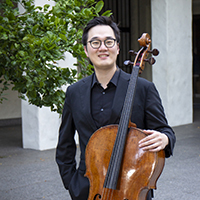 Sung Chan Chang, Associate Principal cello of the HSO, began playing at age 7 in his hometown of Seoul, South Korea. He made his debut with the Seoul Philharmonic Orchestra in 2000, attended the Seoul Ye-Won Art School, the Korean National University of Arts for his Bachelor’s degree in 2008, and the Juilliard School for his Master of Music degree in 2010. In 2012, he received the Artist Diploma from Yale University. Sung Chan is currently pursuing his Doctor of Musical Arts degree at Northwestern University under the guidance of Hans Jørgen Jensen.

Chamber Music Hawaii coined this new word to describe its combined ensemble of mixed instrumentation drawing from all three of the resident ensembles. Tresemble concerts can program many great pieces of chamber music that do not fit into one of the typical categories. We even bring in guest musicians, such as pianists, harpists or vocalists to perform this often neglected repertoire. Sometimes a Tresemble concert uses a larger group of musicians to perform works such as Mozart’s Grand Partita for winds, Dvorak’s Serenade, or Stravinsky’s L’Histoire du Soldat.